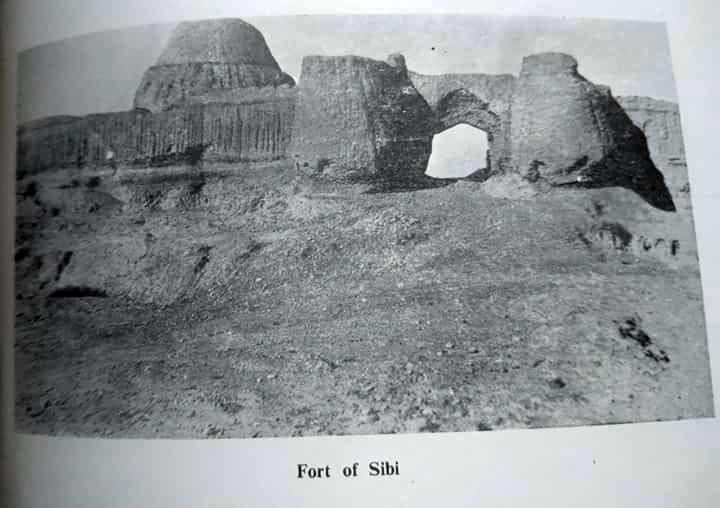 About 1511 Shah Beg Arghun marched against; Sibi to resume his fief and captured the town after a severe stuggle. After rebuilding the fort which he strongly garrisoned made his head-quarters at Shal and Sibi.

Sibi  also finds place in the popular accounts of the Chahnama wherein it is narrated that the king Chah defeated Sewas, pushing them out of this place captured Sibi Fort. The Hindu rulers, Sewas had kept this territory under their control for considerable length of time, having lost ultimately to King Chah in 550 A.D. The Brahman rule continued here till the early part of eight century AD when the young Arab general, Muhammad Bin Qasim, held sway over the whole of these areas. During the 11th century Sibi was included in the vast Ghazanvide Empire.

The Muslim rule continued here as it remained a tributary of the Suba of Musltan under nasir el din Qubacha (1210-1228 AD). Accoring to Ain-e-Akbari, the Sibi Fort was conferred by Jam Nizamuddin of Sindh as fief in 1488 AD on Shah Beg Arghun, who was the ruler of Qandhar.

Towards the end of 15th century and in the beginning of 16th century A.D. Siwi Fort was ruled by Bahahdur Khan of Sindh and then by Sultan Pur-Dil Barlas whose forces were thrown out of the Fort by the forces of Shah Beg Arghun son of Zunnun Beg Arghun. In 1543 A.D. Siwi Fort was visited by the fugitive Mughal king Humayun along with his infant son Akbar, the future Great Mughal and the emperor of India.
The father and the son found the Arghuns in possession of the Fort. Mulla Mehumd Jiskani the Author of Tazkir-ul-Bar assigns 15th century A.D. for the occupation of Siwi by the Pannis. According to the Akbar Namah of Abul Fazal and Akbar Nama of Faizi Sarhindi by 1575 A.D. Panni Afghans were already in control of Siwi Fort. Therefore, must have been present in the general area of Siwi much before that date since it is likely that their conquest of Siwi would have taken some considerable time.
The Government records evidence shows that Dehpal a panni Tribe lived in Siwi Fort they possess the land adjacent to the Fort, a village Dehpal Kalan is situated near the Fort.